Upcycled Men's Lumberjack Shirt
(This one is complete with cotton batting, for evtra warmth for my skinny dog.)

What you will need:
-1 Men's Shirt extra thick for warmth if you are going to make it for winter.
(I picked this one up for $2 when my neighbor was having a garage sale this summer)
-Fabric Sheers/Scissors
-Rib Fabric (I used black to match, and because I had it on hand)
-Sewing machine (and I also used my serger)
-Fabric chalk 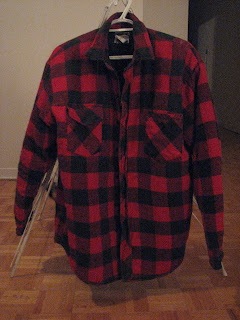 To start, I put the jacket around my dog, with the top button done up, so I could trace my pattern to custom fit him. (Only drew on one side since I will cut on the fold) 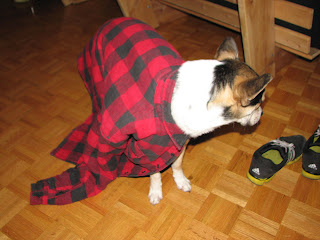 Can you see the white line? I drew starting from his back end,down and around, to leave room for him to still go to the bathroom, levelled off where I thought would be a good length on each side. Also, I traced from the from neck to make sure I had enough coverage on his chest. (He is really skinny and shivers a lot in the snow.) 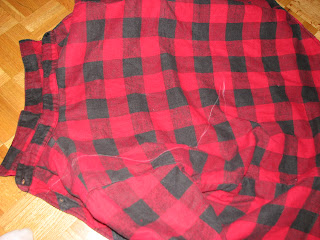 I then cut, leaving more than enough (1.5") for seam allowance, so that my fabric would lie flat without the arms in the way. 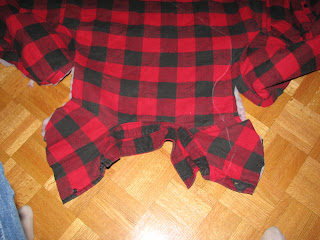 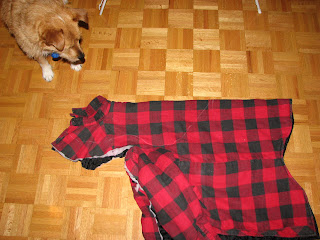 I folded in half so that I can cut evenly to match each side. See below, I darkened my chalk line so you can see what shape suits my dogs. Also, I straightened out my line where the ribbing will attach under his body. 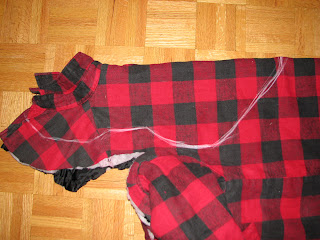 I then cut leaving 1cm for seam allowance. Be careful if you are also using a fabric with layers like the quilting I chose, as you might want to pin the layers together so they do not shift when you are cutting. 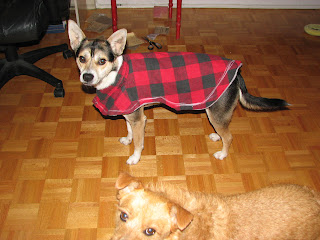 I tried it on him, so I could see how it fit, before moving on. I love it! 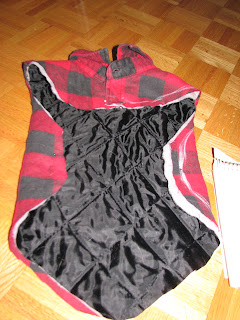 I switched it to its back, so I could figure out the next piece. I measured Troy (the dog) around his belly (21") and then around his chest (22") so that I would know how big/small to make the ribbing. I also measured the length I would need to connect the from chest to the finished length at his belly. (7.5")

I sort of skipped taking a picture of the next step, but will explain how and if you need more details, shoot me an email. He is 21" around at the belly, and my checkered fabric reaches 15" after seam allowance, I needed 6" to make up the difference in his size. Using ribbing you need to subtract for the stretch, so I used a total of 6" including seam allowance for that measurement.  I marked on my folded rib fabric the end point (A), and measured up 3"(B). Then I marked the length, 7.5" (C) marked my 2" for the front chest (total 4")(D) and then marked the distance to the chest (4.5")(E) and the 5" (total for 10") (F) for the chest point. I then connected all the points, and cut along the line, because I was including my seam allowance in the measurement. Here is a diagram to help with all the wordiness I just typed: 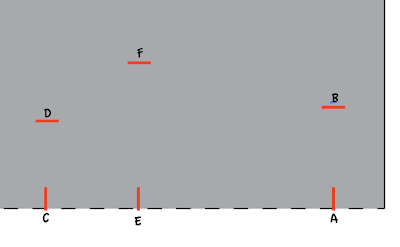 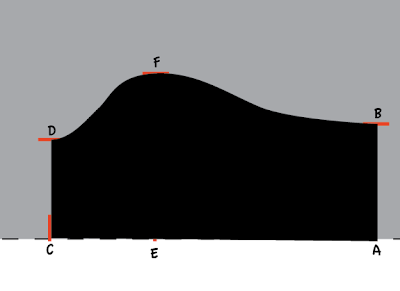 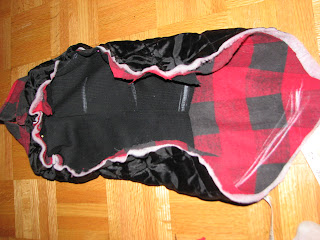 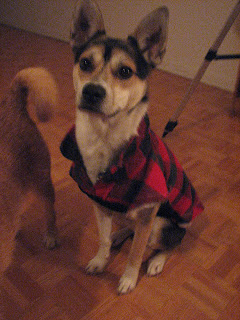 I then tried it on my pup. One of the armholes I had stitched a little too tight, but since it was basted I pulled out the few stitches and made it more comfortable for him. Doesn't he look like a stud?

I stitched my seams, serged the seams and edges, and hemmed the hole thing. Once it was to this stage, I tried it on him again, this time because the edges were hemmed and stiffer it was bubbling up at his butt, so I created a dart so it would wrap around him a bit better. The boyfriend suggested attaching one of the pockets from the shirt, and that it could double as a plastic bag pocket, so we can always have a stash when we go to the park! 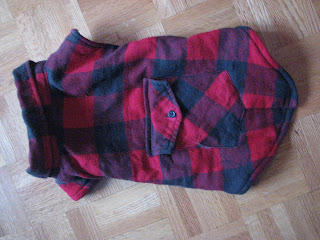 FINAL FRONT AND BACK! What do you think?
PS we stand our pup up and put his front legs in first then pull the shirt over his head. He is a very patient pup! 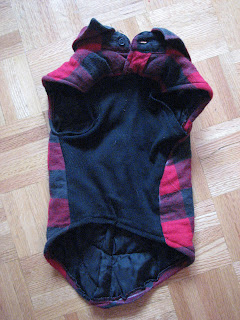 If you make your own I would love to see photos and hear what your dog thinks?